One thing many people think about when they’re flying a long distance with a connecting flight – especially if the connecting time is short – is “What happens if my flight is delayed and I miss my connection?”

Thankfully, passengers traveling within the EU and on flights departing from the EU are covered by EU 261 regulations, which were passed in 2004. You could be entitled to missed connection flight compensation under EU 261. If this sounds like you, check out what happens if you miss your connecting flight due to delay, and what you can do about it.

Missing Your Flight Because of the Airline

If you miss your connecting flight because of something that is within the airline’s control, you may be entitled to compensation under EU 261. This includes being denied boarding because the airline overbooked the plane, as well as technical and mechanical issues. In these cases, your airline should book you on the next flight out with available space, at no additional charge. If your new flight requires you to wait in the airport for a significant amount of time – especially overnight – the airline should provide you with food, hotel and transportation vouchers.

Above and beyond vouchers, if you missed a connecting flight due to cancellation or a long delay, you could be entitled to flight cancellation compensation. Once you’ve reached your final destination, talk to an expert about filing a claim.

Missing Your Flight Due to the Weather

There are a few exceptions when it comes to the EU Regulation 261 and those are considered “extraordinary circumstances” that are outside the airline’s control. Severe weather is one of these – and it’s the most common excuse that airlines give for delayed flights. That’s because while the weather seems straightforward, in reality, it can be difficult to prove that the weather at any given time is what actually caused a delay.

Weather can affect different aircrafts in different ways, so while one may be able to land, another cannot. There are also different types of wind – so just citing “wind” as a reason may not be enough for an airline to get out of paying you missed connection flight compensation.

Extraordinary circumstances might not be as straightforward as you think. If your airline is claiming your delayed flight was due to weather, you may still be able to get compensation – but you will need to be persistent.

What To Do When You’ve Missed Your Connecting Flight

Missing a connecting flight is one of the most frustrating consequences of delayed flights – it can throw your entire holiday out of sync and result in extra costs. Being prepared for what happens if your flight is delayed and you miss a connection can help lower your stress levels and mitigate some of those costs.

Here’s what you can do once you realize you’re not making that connecting flight: 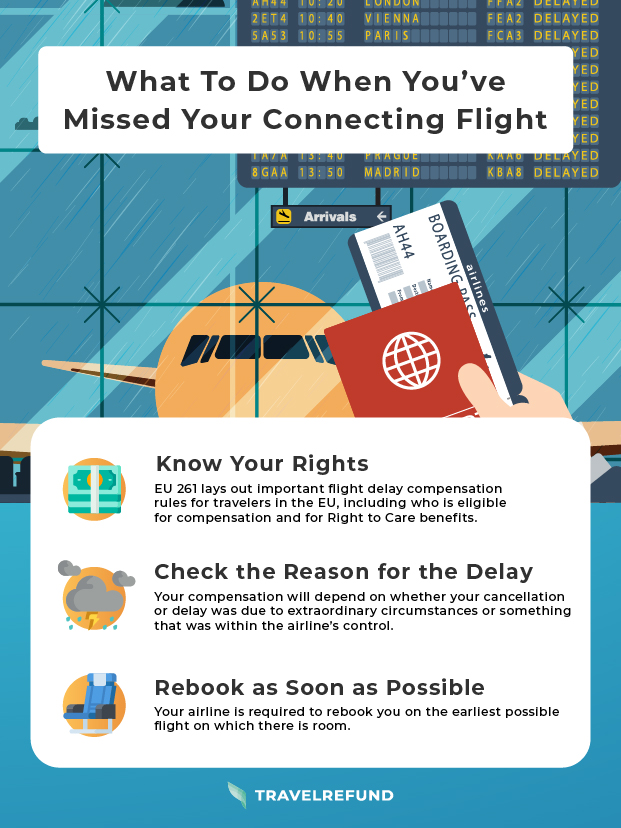 EU 261 lays out important flight delay compensation rules for travelers in the EU, including who is eligible for compensation and for Right to Care benefits, which are vouchers for food and drink.

One important distinction for any type of compensation is that your first flight and your connecting flight must be on the same reservation. If you booked two separate tickets, for example on different airlines, that actually doesn’t count as a connecting flight for compensation reasons. Also, remember that delays due to extraordinary circumstances aren’t eligible.

If your flight delay is less than 3 hours, you’re not entitled to vouchers for food or drink. If you’re rebooked onto a new flight by the airline within 3 hours, and arrive at your destination less than 4 hours later than your original booking, you’re also not eligible for food and drink vouchers or flight compensation. However, if you nicely ask the airline for a lounge pass, you just might be able to get one in either of these circumstances!

You can refuse to take a flight that is delayed 5 hours or more. This can sometimes be your best option for getting to your final destination. That’s because the airline must give you a full refund for your entire reservation, and a flight back to your origin airport. From there, you may be able to book a flight on a new airline.

Check the Reason for the Delay

Remember that extraordinary circumstances aren’t always straightforward, and your airline may try to use this loophole to get out of paying you. You may need to do some digging to get to the truth, in which case hiring an expert to help you can be a smart move.

Rebook as Soon as Possible

It can be easy to get caught up in thinking about what happens if you miss your connecting flight due to delay, but don’t forget that the most important thing is the need to get to your final destination. Your airline is required to rebook you on the earliest possible flight on which there is room.

Head to your airline’s desk as soon as your flight is canceled or delayed so that you can be one of the first to rebook. You can also call your airline, which might give you a better chance of reaching someone quickly. Being first in line to be rebooked can make a huge difference in how quickly you get to your final destination.

Ways to Prep for Future Travel

If you’ve experienced a situation like this, you certainly don’t want it to happen again. While EU 261 makes travelers more comfortable and compensates them for hardships, it can’t go back in time and give you a relaxing holiday you really wanted. The best way to be prepared for what happens if your flight is delayed and you miss your connection is to try to make sure it doesn’t happen to you in the first place. 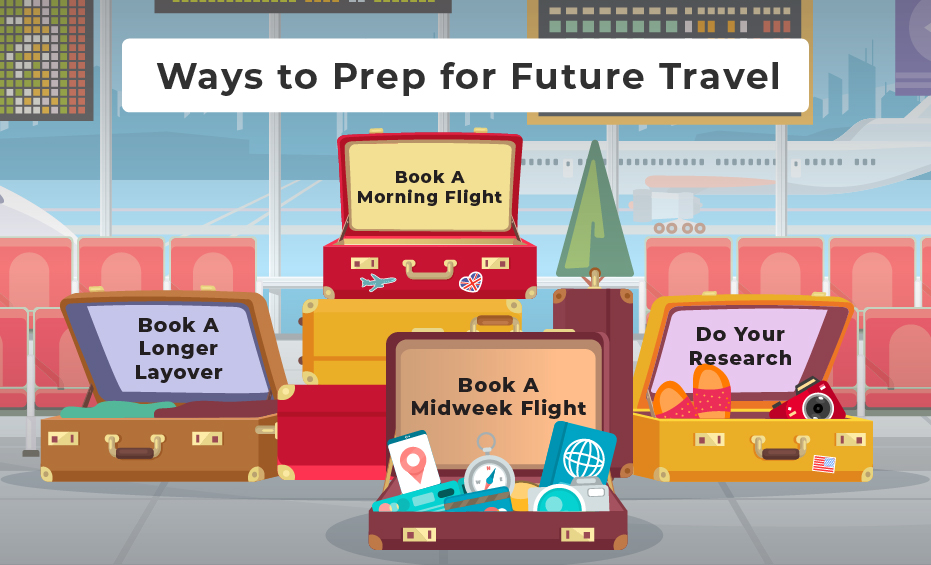 Quick layovers are attractive because it means less time sitting around the airport, waiting in uncomfortable chairs or spending money on food and drinks. But think of all the things you need to do to make it to your next flight – disembarking the plane alone can take a long time if you are seated in the back! Add in bathroom breaks or stopping for a quick meal, and you’ve barely got enough time to make it to the gate. Make sure you book connecting flights with at least an hour between flights for domestic travel, and two hours for international travel – or even more, to be extra safe.

Aircraft arriving late due to delays at their origin airport create a ripple effect known as the “knock-on effect.” These add up and cause bigger delays in afternoon and evening flights. Also, if your morning flight is delayed, you’ll have a better chance of getting on a different flight on the same day – and less of a chance of having to stay overnight at the airport or deal with transportation to and from a hotel.

There’s a reason flight prices are lower in the middle of the week: airports are less busy then! Yes, it’s really that simple. With fewer planes taking off, there’s less of a chance for that “ripple effect” we mentioned to build up. Booking in the middle of the week is an easy way to not only avoid flight delays but also get a much cheaper ticket.

The EU has very busy airspace – 1.1 billion passengers flew to and from Europe in 2017 – and some airports are busier than others. London Heathrow, for example, saw 80 million passengers in 2018. You may have a lower chance of flight delay at London Gatwick, a much less busy airport. Many organizations and websites report on-time statistics for both EU airports and airlines, so do your research and book a flight on an airline with a good reputation, through a less-busy airport.

Be Prepared in the Event of a Flight Delay

Delayed flights and missed connections are never fun – and can be downright stressful. Between rebooking your seat, claiming your vouchers and possibly even needing to find somewhere to sleep, there’s a lot to think about. But when you’re familiar with EU 261 and know what happens if you miss your connecting flight due to delay, it makes a tough situation just a little bit better.