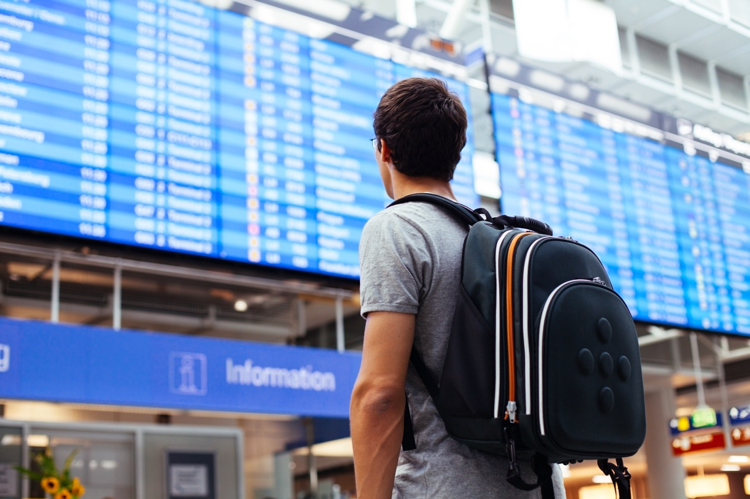 There is a laundry list of stressors that come along with traveling. Flying is particularly finicky because of the lack of travel options, other than via airplane, for getting to your destination in a timely fashion.

Each day, countless travelers fall victim to delayed, overbooked, and canceled flights. The good news is that you have rights as an air passenger, and you are entitled to EU flight delay compensation.

From that point, a chain reaction is set in motion. Your woes may begin as a 30-minute disruption before eventually spiraling into a serious problem that requires a solution.

We are going to explore the air passengers’ rights to flight compensation, how to make a claim against an airline, and how TravelRefund will help you each step of the way.

Passengers who are dealing with flight delays in the EU may be entirely unaware of their rights to fair compensation from airlines. Even those passengers that happen to be aware of their power to make a claim can be discouraged due to the lengthy process that awaits them.

If there is a delay due to an error on the side of the airline, air passenger rights Regulation EU 261/2004 stipulates that compensation is due. This law was solidified in a 2015 ruling when the European Court of Justice ruled that unforeseen technical problems were not enough to get airlines off the hook for flight delay compensation. Airlines also have a duty of care for passengers, and you may also be entitled to refreshments, meals, and reimbursement for your transportation to a hotel if it’s necessary.

Going after the money that is owed to air passengers and jumping through the necessary hoops to extract it from the airline may not appear to be worth the effort. We are adamant about fighting for air passenger rights for flight delay compensation in the EU and overcoming the long, drawn-out process that tends to stand in our way.

There is an important point that we want to make. You need to be first in line to get paid, there is no reason to hesitate! We understand the plight of being a passenger that must face off with an airline, but the law that is empowering passengers is continuing to get stronger since passing in 2004.

How much you can expect to receive from the airline for your overbooked, delayed or canceled flight is dependent on the details of your trip. That includes whether or not the airline made an offer for reimbursement in a timely fashion, the length of your flights and how long you have been delayed when you arrived at your destination.

Demanding compensation from the airline in the event of a delay is your right, one that is consistently held up in court, and we will work with you.

EU flight delay compensation can be a complicated process because of the bureaucratic nature of major airlines. It’s a time-consuming process and we understand that the can turn some passengers away from going after proper compensation for their flight woes. The process is an unpredictable one, and the airline might be offering you compensation.

The EU outlines the situations where air passenger rights apply. These situations include:

When a flight is delayed, canceled or overbooked, passengers become eligible for anywhere from 250 to 600 Euro in compensation unless there are exceptional circumstances present. “Exceptional circumstances” is a term that refers to factors that impact your flight which are completely outside the airline’s control. something that they couldn’t in any way have prepared for or predicted. It can be often difficult and intimidating to claim the compensation from the airlines on your own. That’s where we come into the picture.

In the event of a delayed, overbooked, or canceled flight, you have the right to make a claim, but we know how difficult and daunting that can be. The airline’s only defense against your claim is an extraordinary circumstance that had a direct impact on the ability for your flight to leave on time.

Rather than going through the long, drawn-out steps that airlines might prefer, including paperwork, we continue to work towards making the process as efficient and hassle-free as possible. It’s important to put yourself in the airline’s position and take a look at the situation from their point of view. Major airlines receive thousands of claims each day and they will try and stall the process. The only consideration they will make is whether or not they can get away with not paying your compensation for a flight delay.

As soon as you have filed the claim with us, we will handle every aspect of collecting your claim for you. We will not charge you anything unless we can get your compensation from the airline. Making sure that our clients get the money that they are owed is our primary concern, but we don’t stop there. Beyond EU flight delay compensation, we can help you recover expenses from being forced to book a longer stay at a hotel, rent a car for longer than originally intended, lost wages, and more.

TravelRefund Will Fight for You

We are the company that takes it all the way and doesn’t stop when the airlines try to deny the compensation.  There are so many traps and challenges that passengers have to avoid while filing a claim. We often win cases where our competitors have given up, because we will go that extra mile and don’t accept anything less than seeing each flight compensation claim to the very end.

The law provides airlines with some wiggle room, but it’s just another challenge for our legal team to overcome. It’s a direct result of “extraordinary circumstance” being a legal assessment, and it is usually on this point that the battle between the airline and our team stands. However, if a flight is delayed and the airline cannot produce solid evidence to prove exceptional circumstances, it must compensate all affected passengers.

At TravelRefund, we are constantly innovating and working to improve this process so that our clients get what they deserve in the quickest manner possible. When you charge us with collecting your compensation, it is a simple success/fail scenario. We operate on a no cure, no pay basis, either you get your compensation, or you don’t. You will never get a bill from us that is not accompanied by an even larger payment from the airline.